Sermon on the feast of Pope St. Pius X 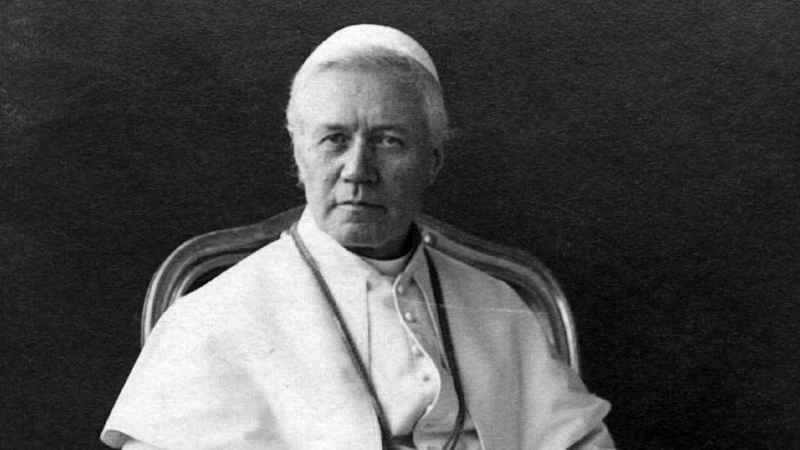 Behold the high Priest who pleased God during his life and was found just. No one has been found like him in observing the law of the Most High"  (Mass of a Confessor Bishop).

After the death of Pope Leo XIII on 20th July 1903, the princes of the Church, the cardinals, entered into conclave. Mgr Merry de Val, the young sophisticated and brilliant diplomat was unexpectedly made Secretary of the Conclave and after the dramatic attempt to veto the liberal Cardinal Rampolla by the Emperor Franz-Joseph, and after several ballots, Cardinal Giuseppe Sarto was elected on 4th August 1903 by 55 out of a possible 60 votes.

He was under no illusion about the task that faced him. The Church had lost the last of its Papal States in 1870 to the Italian Revolutionaries, the major secular powers of the world were controlled by the enemies of the Church, the morals of the age were in deplorable decline,

and the Church herself was being corrupted from within by pernicious errors.

So when the Cardinal Dean asked Cardinal Sarto what name he would assume as pope, the answer was: “Since the Popes who have suffered most for the Church in this age have borne the name of Pius, I will take this name.” His coronation took place on the following Sunday, 9th August 1903.

The election of Pope Pius X was a surprise to the world. He was not from the Roman Curia, he had no diplomatic experience, he was of humble origin, the son of a postman, and virtually unknown outside of Italy. He didn’t even speak French (the international language of diplomacy)! He was the first to ascend the throne of Peter having passed through every clerical rank from curate to pope.

But the surprise of his election was short lived as the new pope lost no time in putting his hand to the plough.

On 4th September 1903. Pope Pius X published his first encyclical: E Supremi Apostolatus which was the mission statement of his pontificate:

4. Since, however, it has been pleasing to the Divine Will to raise Our lowliness to such sublimity of power, We take courage in Him who strengthens Us; and setting Ourselves to work, relying on the power of God, We proclaim that We have no other program in the Supreme Pontificate but that "of restoring all things in Christ" (Ephes. i., 10), so that "Christ may be all and in all" (Coloss. iii., 2).

“To restore all things in Christ” this was his motto, this was the battle cry.

From the start, with great skill, great determination …and great holiness, Pope St. Pius X set about reforming the Church so that it could continue the mission of Our Lord Jesus Christ on earth to teach, to govern and to sanctify:

In respect of the Church’s mission to teach

Pope Pius X wrote an encyclical promoting catechetical instruction: Acerbo nimis 1905, and published his own Catechism in 1908. He repeatedly warned against the error of Modernism: 1907 Lamentabili (Syllabus of Pope St. Pius X) and Pascendi Dominici Gregis against Modernism. He gave teeth to the Biblical Institute for Catholic interpretation of Scripture by his 1907 Moto proprio Praestantia Scripturae – against the Modernist interpretation of scripture.

In respect of the Church’s mission to govern

He launched and closely managed a singularly difficult project to unify the code of Canon Law across the Church. It was finally brought to fruition in 1917 under Pope Benedict XV. He cleared the modernists out of all seminaries and teaching posts in Catholic schools and universities and instituted the anti-modernist oath 1910. He took the courageous decision to oppose the Freemasonic government of France to guarantee the freedom of the Church which led to the separation of Church and State (Vehementer nos 1906)

In respect of the Church’s mission to sanctify

He promulgated the 1908 Encyclical Haerent Animo on the importance, nature and means of priestly sanctity. He issued the 1910 Decree Quam Singulari permitting precocious Holy Communion. He published the 1910 Moto proprio on Sacred Music to restore Gregorian Chant.

He enacted a programme which, dare I say it, is almost a perfect anthesis of the programme of the present pontificate. For today, in respect of the Church’s mission to teach: we see intellectual & moral relativism, the perversion of Catholic education, religious ignorance to a degree never imaginable in Pope St. Pius X's time.

In respect of the Church’s mission to Govern: we see praxis riding roughshod over natural law, circumvention of the authority of the bishops in their dioceses and priests in their parishes, and putting the Church at the service of the New World Order.

In respect of the Church’s mission to Sanctify: we see the destruction of the priesthood and the liturgy, abandonment of the supernatural order, and disrespect even for the Blessed Sacrament

But this was foreseen by Providence, the pontificate of Pope St. Pius X, in its day, gave new life to the Church: sufficient to nurture and inspire a young Marcel Lefebvre (who was but 10 years old when the Pope died), and sufficient to forge a link in history's chain, passing-on what had been received, so that the Church might survive the storm of the present day.

Many say that the outbreak of the Great War broke his heart. On 18th August Pope Pius X contracted fever and died on 20th August 1914.  Miracles were soon attributed to the holy pope. He was beatified by Pope Pius XII in June 1951 and then canonised on 29th May 1954.

The inscription on his tomb, in St. Peter's reads: Born poor and humble of heart, Undaunted champion of the Catholic faith, Zealous to restore all things in Christ, Crowned a holy life with a holy death.

This epitaph admirably explains why our founder, Archbishop Lefebvre chose St. Pius X as patron of our Society. It was not because he was anti-modernist, but because he was a holy and courageous priest, a sacerdos magnos who pleased God during his life and was found just  .. and that it would be through such priests that the calamitous crisis that afflicts the Church would be resolved.

So, let us honour our Patron with our fervent assistance at this Mass, begging his intercession that we (priests, brothers, tertiaries and faithful) might ….

…take courage in Him who strengthens Us; and setting Ourselves to work, relying on the power of God, proclaim that We have no other program in our ministry and in our religious lives but that "of restoring all things in Christ" (Ephes. i., 10), so that "Christ may be all and in all" (Coloss. iii., 2).

We make this prayer to Jesus through the BVM, of whom both, we rejoice to call ourselves apostles.