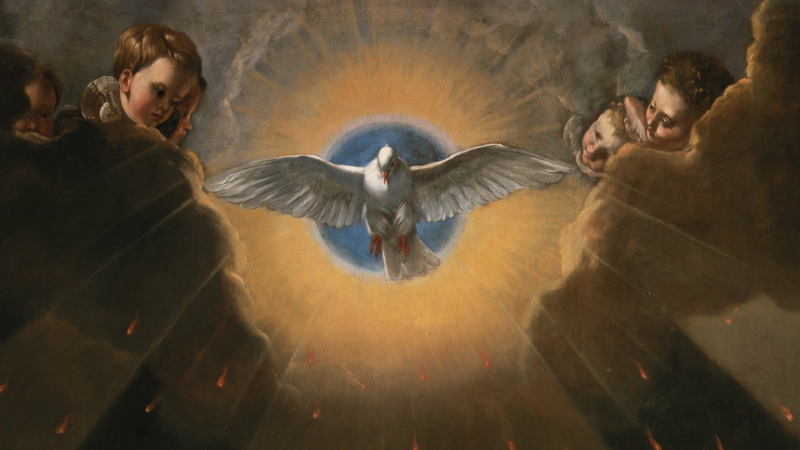 This quotation from the Gospel of St. John is a summary of the last chapter of the greatest love story ever written. It is a story of love and betrayal, joy and sadness, defeat and victory. It is a story of four parts with a prologue and an epilogue.

The prologue describes the creation of the universe by God as an outpouring of Goodness which could not contain itself.

At the summit of this creation were the angels and men made in His image and likeness - being endowed with an intellect and a will – so that they may know, love and serve God, not simply as creatures with their own natural faculties, but as creatures participating in the Godhead – sharing His life and thus sharing in His act of knowing and loving and glorifying Himself.

Some of the angels and all of men fell from grace when they misused the gifts given to them. The angels’ fall was irrevocable because their decision to love themselves before God was irrevocable – it was made with perfect knowledge and with a definitive will. The fall for man, however, was not irrevocable, but it was impossible for man to restore himself. He could not make the infinite reparation to God required by justice. He could not redeem himself, but God in His mercy sent a Redeemer

Part I – The Incarnation

And so the stage is set for the first chapter of the story. In the fullness of time, after preparing the Jewish race to receive Him (as narrated in the Old Testament), God entered into His creation and was made man. The Second Person of the Blessed Trinity took to Himself a human nature. “God so loved the world, as to give His Only Begotten Son.” (Jn 3:16). In an outpouring of love He created man, in an outpouring of love He sent His Son. He was born of a Virgin and lived among men – teaching them, giving them a new law of charity, healing them and sanctifying them.

He loved them and His love was returned.

The next chapter, the darkest and brightest in the history of the universe, was the sacrifice of the God-Man for His creatures and subsequent victory of the Redeemer over sin and death.

It was the darkest because men killed the God-Man.

Part III – The Founding of the Church

And then we come to third part of the greatest of all stories, which we celebrate today. On this day the Holy Ghost descended upon Our Lady and the Apostles, fifty days after the Resurrection of Christ, to confirm their faith, to sanctify them, to enable them to build the Church

On this day, as most of the fathers have it, the Church was founded. The Church is the assembly of the faithful under one head,  Jesus Christ, founded to continue the work of the God-Man in the world: to teach, to govern and to sanctify men so that they may make the Redemption fruitful in their own lives.

On this day, the Holy Ghost descended on Our Lady and the apostles with sanctifying grace, the supernatural virtues and His Seven Gifts.

The Gifts of the Holy Ghost

The seven gifts are enunciated by the prophet Isaiah:

There are a number of different ways these gifts can be explained. Here is a simple way given to us by St. Thomas:

Part IV – The Sanctification of Men

And so we come the last chapter - the Sanctification of Men.

In this chapter, through the action of the Church (its teaching, governance and sanctification) men are called from the hedgerows to the divine banquet. They are called to become adoptive sons of God, co-heirs with Christ, and living members of His Mystical Body.

They are called to draw down the merits of the Objective Redemption – made present at every Mass – to their own souls to effect their Subjective Redemption by the worthy reception of the sacraments whereby they receive the sanctifying grace, supernatural virtues and gifts.

They are called to become holy and apostolic members of His Church.

Regrettably Modern Man has rejected these Gifts:
- By his rejection of God as Supreme Being and Sovereign King, he forsakes Wisdom.
- By his idealist philosophy, he renders himself incapable of Understanding the truth.
- By his refusal to accept the natural law, he is bereft of both Knowledge and Counsel in his actions.
- By his worship of himself, he loses all Fortitude and slides into depravity.
- By his rejection of authority, he despises those to whom he should practice Piety.
- By his contempt of God’s law, he blasphemes instead of Fearing the Lord.

Let it not be so for us.

The final chapter of the Love Story closes when our alotted time on earth is over. For those who answer the call - Whoever loves me and has kept my commandments - they will die with Love – the Holy Ghost - in their souls.

This, my dear brethren, is our life’s work …and our work here and now. Let us pray therefore, that we may welcome, together with the  sanctifying grace and supernatural virtues, the Gifts of the Holy Ghost today by which we will know the Love of God, keep His commandments, and be His abode until we are called Him.

We offer this prayer through the Blessed Virgin Mary, through whose hands all the supernatural graces. virtues and Gifts pass.

And the epilogue to the story? This is too long to tell, for it lasts forever.