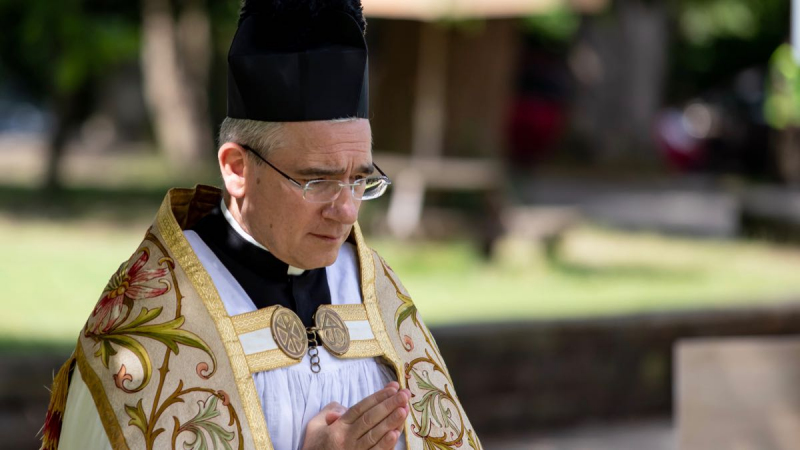 I say then, walk in the spirit; and you shall not fulfil the lusts of the flesh. (Gal 5:16)

A fundamental problem of our age is Materialism.

Materialism is not addictive spending on credit cards to buy disposable furniture and gadgets (that is a symptom); it is living as if the spiritual world does not exist, or even denying its existence.

A materialist will claim that physical science is the highest science: if science has nothing to say, then one is in the realm of personal opinion. Concrete examples of materialism in politics cannot be avoided. The whole New World Order is radically materialist. It hasn't arrived at the brutal atheistic materialism of a communist totalitarian regime, but it is rapidly heading in that direction.

The resultant effect is that man becomes a slave of matter: the scientists will tell me what I am (I am merely a complex chemical chain reaction); he will explain away all my actions (I am a genetic criminal – so not my fault); he will control my body and my actions (by surveillance, by algorithms, by drugs  …and vaccines).

The physical sciences will be the arbiter of true and false, of right and wrong.

For a materialist there is no point in dreaming of a good beyond the physical such as a loving God, redemption, heaven, or happiness (as opposed to pleasure).

To the materialist: there is no immortality of the soul (we just disappear, no heaven, no hell); if a human being is aborted or euthanised or commits suicide, it’s no big deal - just a rearrangement of atoms - nd it's probably convenient the planet anyway.

A materialist would say: "I can decide to be a man, a woman, a kangaroo or a tractor. I can do whatever I like; the only guide is my feelings; the only restriction is that I must not hurt others (there is no such thing as the common good).

Instead of being the explanation and guide for man, materialism ends up destroying man. It pushes man into living an incoherant double life: nature is telling him one thing, woke ideology is telling him another (e.g. "abortion is healthcare, gender is whatever you feel, life is for sensual pleasure" etc.)

Materialism and the traditional Catholic

Regrettably, traditional Catholics also are among those who lead double lives to some extent by being practical materialists: We proudly profess our faith, but we give so much credence to the world that we live according to a different creed.

How many wish to belong entirely to Jesus without reserve or restriction? Most want to serve two masters, to be under two standards.

A union of worldliness [materialism] and devotion; a perpetual succession of sins and repentance; something given to grace, more to [fallen] nature; fervour and tepidity by turns.

Such is the state of many religious. Obligations are whittled down; rules are interpreted laxly; all kinds of excuses are invented for self-indulgence, health, greater glory of God in the end, etc. No service is so hard as the half-and-half; what is given to God costs more;

His yoke is heavy; the cross is dragged, not cheerfully carried; the thought of what is refused to grace causes remorse and sadness; there is no pleasure from the world and little from the service of Christ.

What we should do

My dear brethren, we are called to a life of faith, which when lived fully – integrally - will bring forth the fruits of the spirit. As St. Paul says in the epistle today:

But the fruit of the Spirit is, charity, joy, peace, patience, benignity, goodness, longanimity, 23 Mildness, faith, modesty, continency, chastity. Against such there is no law. 24 And they that are Christ's have crucified their flesh, with the vices and concupiscences. 25 If we live in the Spirit, let us also walk in the Spirit. (Gal 5:22-25)

Let us examine our consciences on this point: DO WE TRULY LIVE ACCORDING TO THE SPIRIT – THE LIFE OF FAITH OR ARE WE MATERIALISTS AT HEART – dragging our crosses?