The Divinity of Our Lord - Ite Missa Est editorial 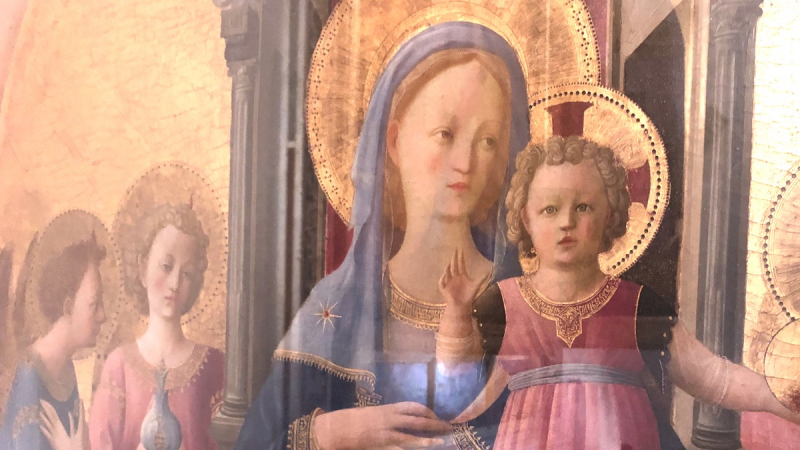 The Divinity of Our Lord Jesus Christ

as known by Our Lady

As the Blessed Virgin Mary looked into the face of her Son, she knew that He was God. She knew this by a supernatural act of faith.

The Divinity of Jesus of Nazareth is not evident by simple observation or by reason; it requires faith. It is a divinely revealed truth and a central pillar of the Catholic Religion.

There are two types of faith possible in divinely revealed truths. Faith can be natural faith or supernatural faith.

Natural faith is inspired by the examination of supporting evidence in the light of reason alone. It is possible to have a natural faith in the divinity of Christ. Such a faith would be based upon a belief in the truth of scripture and a judgement that, on the balance of probability, the hero of the Gospels was indeed divine. This would be a weak faith and, in itself, avail nothing to eternal salvation.

Supernatural faith is the act of the supernatural virtue of faith which is infused by God into the soul to move the intellect to give assent to all truths revealed by God.

The truths revealed by God are to be found in Sacred Scripture and tradition; they are taught to us with the authority of the Catholic Church, and are unpacked in the light of reason by the science of theology. They are always reasonable (ie. they are not contradictory or absurd), but mostly they are beyond reason.

Acts of supernatural faith are acts of submission to the authority of God as a revealer of truth. This submission is absolutely necessary for salvation.

Importance of faith in the divinity of Our Lord

It is easy to understanding why the divinity of Our Lord is a central pillar of the Catholic Faith. If the baby Jesus was not God, then there would be no infinite sacrifice, no objective redemption of mankind, no Mystical Body of Christ, and no hope of salvation.

Furthermore, the words of Jesus would not make sense, His death and those of the martyrs would be vain, and the visible Church would have lived a two thousand year error.

The Faith of the Blessed Virgin Mary

From the moment of her conception Our Lady had a plenitude of sanctifying grace, supernatural virtues, and Gifts of the Holy Ghost.

Many theologians hold that she had infused knowledge and the use of her will too – at least in a transitory way – so that she could pose supernatural acts of faith, hope and charity from the first moment of her conception in order that her plenitude of grace be made fruitful from the very beginning of her existence.

In support of this view they say that, if St. John the Baptist could leap for joy in the womb of St. Elizabeth, it became Our Lady that, as the greatest of creatures, she was granted the use of reason and will too, even in her mother's womb.

After the age of reason

Of course, Our Lady had no knowledge of her future divine maternity until the Angel Gabriel appeared to her, but having attained the age of reason, in addition to any infused knowledge she may have received, the perfection of her senses and the powers of her soul would have given her an ever-increasing insight into mysteries revealed to the prophets and patriarchs.  Thus, she would even have a certain knowledge of the Blessed Trinity before the Annunciation.

At the Annunciation, the Angel Gabriel appeared to Our Lady in bodily form to communicate a message from God. Our Lady understood the message both through her senses and by direct illumination of the mind; she understood that she was to be the Mother of God.

She believed all that was revealed to her by the supernatural virtue of faith, thereby, as Pope St. Leo the Great says, she first conceived God perfectly in her mind, before conceiving Him in her womb.

After the departure of the Angel, was Our Lady's mind in a whirl or did she ponder the revelation and the enormous reality of her Divine Motherhood in serenity? Even with her natural and supernatural gifts, was the reality too great to take in all at once? St. Luke does not say, but we know that she knew that she had conceived God in her womb.

Her faith was nourished further by the words of her cousin Elizabeth: “Blessed art thou among women and blessed is the fruit of thy womb.” and “whence is this to me, that the mother of my Lord should come to me?” Then, moved by divine inspiration, Our Lady gave voice to her faith in the beautiful hymn, the Magnificat.

From the stable at Bethlehem until the Assumption.

When her time was accomplished, she brought forth the Creator as a little child, wrapped Him in swaddling clothes and laid Him in a manger. By faith, Our Lady adored her child as God.

For thirty three years her faith grew with infused knowledge, by direct revelation from the mouth of her Son, by observance of His life, Passion and Death, and by every act informed by supernatural charity.

Her faith grew at Pentecost, as she assisted the Church in its fledging years, and until the end of her earthly life.

Always she grew in faith and yet had the greatest faith possible at each moment. She was like a growing and overflowing cup.

Our faith in the divinity of Christ

But, on this eve of the great feast of Christmas, let us return to the stable in Bethlehem. Despite His humble and bleak surroundings, Our Blessed Lord was comforted in that stable perhaps more than at any other time on earth because, for this brief and unique moment of His life on earth, He was surrounded and loved only by those who truly believed that He was God: Our Lady, St. Joseph, the shepherds, and the Magi.

My dear brethren, as we prepare to celebrate this feast, let us strengthen our faith in the divinity of the child. Make everything ready for His entrance into our hearts by grace: go to confession, read the liturgy and meditate upon spiritual works. Let us make ourselves worthy that we might join the humble shepherds and be a part of that precious moment in the life of Our Lord and Saviour. May we live according to what we know by faith – what Our Lady knew all along from the moment of the Annunciation – that her Son Jesus is indeed God.

Wishing you every grace this Christmas and new year.