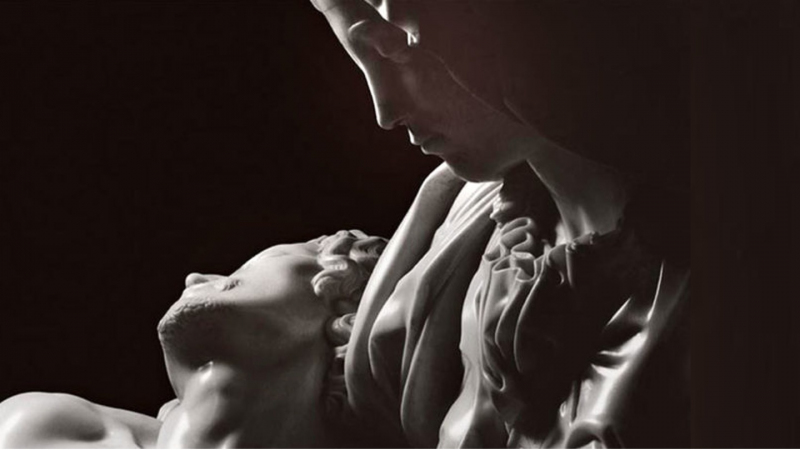 In this time of Eastertide we rejoice because the price of our liberation from slavery and eternal death has been paid by the blood of the God-Man, Jesus Christ.

We manifest our joy and gratitude not only to Our Lord, but also to His mother for, by His Divine ordinance, He chose Mary to assist Him in this work of redemption, so much so that she is rightly accorded the title of Co-Redemptrix of all mankind.

How the title is applied to Mary

Mary as Co-Redemptrix must not be conceived in the sense of Mary’s part in the Redemption being equal or even of the same order as the part played by her Son who is the sole Redeemer of humanity. As she herself required redemption and was indeed redeemed by Christ at the moment of her conception, she could not merit herself the grace of redemption.

Mary co-operated in the Objective Redemption because she gave birth to the Redeemer, voluntarily devoted her whole life to the service of the Redeemer, and, under the Cross, suffered and sacrificed with Him. Pope Pius XII says:

She offered Him on Golgotha to the Eternal Father together with the holocaust of her maternal rights and her motherly love like a New Eve for all children of Adam. (Mystici Corporis 1943)

As the New Eve, she is the sublime associate of our Redeemer. (Munificentissimus Deus 1950).

Co-operation in the Objective Redemption

Mary’s co-operation in the Objective Redemption was a pre-eminent participation in the act of redemption of her Son. Mary prepared the Victim, offered the Victim - not as the Priest, but by joining her will to the will of the Priest – and suffered with the Victim through her emotions to the point of physical pain. She participated in the physical and emotional act of her Son, but it was only His act that objectively redeemed mankind.

In fact, we rightly say that the salvific effect of Our Lord’s sacrifice included all the graces that Mary received: her immaculate conception, her Divine motherhood, her virtuous life and her very participation in the act of the Objective Redemption. The Sacrifice of her Son alone merited the graces of atonement for Original and actual sin such that the impulse for every supernatural act of Mary was actually a fruit of the redemption wrought by her Son.

Co-operation in the Subjective Redemption

Our Lord alone offered the sacrifice of atonement on the Cross. Thus, Mary has no claim to the title of “priest”, for Christ alone merited de condigno (in justice) the grace of Redemption of the whole human race including Mary. Mary’s act of co-operation in the act of the Objective Redemption merited de congruo(according God’s free will) that she be made the dispenser of the redemptive grace of Christ.

Hence, because of her co-operation in the act of the Objective Redemption, she is granted the privilege (merits de congruo) to co-operate in the Subjective Redemption of mankind, on which account (as well as for her Divine maternity), she is rightly hailed as the Mediatrix of all Grace.

In summary, Mary is Co-Redemptrix by both her physical and emotional participation in the act of Redemption wrought by her Son and by her role as the universal dispenser of the fruits of this act.

Honoured through the centuries

Mary has been honoured as the Co-Redemptrix since the second century. The title is not explicit but is necessarily implicit in her being called “The New Eve”. St. Irenaus  (+202) says:

As she [Eve] who had Adam as her husband , but was nevertheless a virgin, was disobedient, and thereby became the cause of death to herself and to the whole of mankind, so also Mary, who had a pre-ordained husband, and was still a virgin, by her obedience became a cause of her own salvation and that of the whole human race. (Adv. haer. III 22,4)

In the century before the Second Vatican Council, Mary’s role as Co-Redemptrix has been both honoured implicitly and explicitly by the popes, from Pius IX, the Pope of the Immaculate Conception, to Pius XII, the Pope of the Glorious Assumption of Our Lady.

For example, as a recurring echo through time, Pope St. Pius X teaches:

As the result of this participation between Mary and Christ in His sorrows and His will, she deserved most worthily to be made the restorer of the fallen world,” and so the dispenser of all the gifts which Jesus procured for us by His death and blood. . . . Since she excels all in sanctity, and by her union with Christ and by her adoption by Christ for the work of man’s salvation, she merited for us de congruo, as they say, what Christ merited de condigno, and is the first minister of the graces to be bestowed. (Ad diem, 2nd February 1904)

During the pontificate of this great pope, a decree from the Holy Office on 26th June 1913 praised “the custom of adding after the name of Jesus that of His Mother, our Co-Redemptrix, the Blessed Virgin Mary.”  The same congregation granted an indulgence for the recitation of a prayer in which Mary is called “Co-Redemptrix of the human race” on 22nd January 1914.

Rejected by the Revolution

Unmentionable at the Council

At the Second Vatican Council, the Council Fathers voted against a schema prepared on the Blessed Virgin Mary as Mother of God and our Mother. Instead, the Council’s teaching on Mary was reduced to forming the eighth chapter of Lumen Gentium, the Constitution on the Church in which the Council recognised Mary’s titles as Advocate, Auxiliatrix, Succour and even Mediatrix, but not Mediatrix of All Graces, or Co-Redemptrix. Despite opposition, Pope Paul VI went on to proclaim Mary as Mother of the Church (in the third session of the Council), perhaps to assuage those disappointed Council Fathers.

Silence after the Council

The period following the Council has been called the “decade without Mary” as Mariology and Marian devotion were almost non-existent in the time of the Church’s auto-destructive frenzy in the name of aggiornamento.

A stumbling block for ecumenism

Pope John Paul II is considered a Marian Pope and did not hesitate to give Mary the title of Co-Redemptrix, but it appears that, for the Pope, the title refers exclusively to Mary’s participation in the Passion and not to her universal role in the Subjective Redemption. The reason for this may lie in a false notion of universal salvation deriving from the Incarnation which is evident in his encyclical Redemptor hominis (1979) or, more probably, it is due to conciliar ecumenical sensitivity which regards Mary as an obstacle to the unity of Christians.

Pope John Paul II attempted to fit traditional Mariology to the Council’s new framework of ecclesiology and ecumenism with the encyclical Redemptoris Mater (1987). Mary is described as “full of grace”, “Mother of the Church”, “Mother to us in the order of grace”, but not Mediatrix of All Graces or Co-Redemptrix. Mary is presented as the interceding mother, the model member of the Church, a figure of respect in other religions, but not the instrument of predilection who participated in the Objective Redemption and thereby merited to be the universal mediator in the Subjective Redemption.

The tendency of minimising Mary’s part in the redemption of men reached its lowest point during a homily for the celebration of the Feast of Our Lady of Guadalupe in St. Peter's Basilica, on 12th December 2019, when Pope Francis expressed his disdain for the title of the Blessed Virgin Mary as Co-Redemptrix.

He said: “Being faithful to her Master, Who is her Son, the only Redeemer, she never wanted to take anything for herself from her Son. She never presented herself as a Co-Redemptrix.”

The proposition “she never wanted to take anything for herself from her Son” is of course true, but the necessary implication that being Co-Redemptrix takes something away from her Son betrays a profound misunderstanding of what the Church has always taught on the subject.

At the end of this homily, Pope Francis added: “When they come to us with the story according to which we should declare this, or that other dogma, let us not get lost in foolishness.”

Pope Francis has not understood that Mary is Co-Redemptrix by participation in both the act of the Passion and in the act of dispensing the redemptive graces merited by the Passion.

It would seem that Pope Francis is imprisoned in a materialist and univocal understanding of the world in which, if Mary were to have the title of Co-Redemptrix, it would necessarily imply that she is like a junior partner in a mixed doubles tennis partnership: the glory and the prize money of their winnings being shared proportionally between her and her Son.

Furthermore, it is certain that the reluctance, or even horror, of bestowing the title of Co-Redemptrix upon Mary owes much to the false ecumenism which is a pillar of the Second Vatican Council. Mary is an obstacle to all false religions in varying degrees. No Protestant, for example, would accept her as Co-Redemptrix or even Mediatrix of All Graces.

A true devotion to Mary as Co-Redemptrix, as understood in the sense of the tradition of the Church, is a badge of identity for Catholics and a light in this world of gathering darkness.

To adapt the words of St. Paul (cf. I Cor 1:22): let us preach Mary Co-Redemptrix, unto the conciliar church a stumbling block and unto our present pope foolishness!

Perhaps, as some say, we are living through the Passion of the Mystical Body of Christ in these dark days. The Church is being held prisoner by the secular world, Peter has denied Christ and fled, only Mary and John remain. We have no public Mass and the sacraments are hard to come by, but Our Lord still looks down upon us and we hear His words again and again: “Behold thy mother.”

I wish you every holy joy this Eastertide, I remember you all collectively at my daily Mass and I thank  all those who have sent donations to support our work.

A number of events listed on the calendar (page 44) risk being cancelled if the government restrictions due to the coronavirus continue. Please check the events page on our website (fsspx.uk) or ring one of priories to check. Regrettably, there will be no public May Procession and no Chartres Pilgrimage this year.

While assisting at Mass is not usually possible, the sacraments of confession and Holy Communion are available by appointment at any of our priories. If you know of any member of the faithful in any danger, then please contact a priory so that a priest may visit.

It was very pleasing to see how the school, parents and pupils adapted so well and so quickly to a new regime of distance learning following the government imposed shutdown.  Success opens up possibilities in delivering Catholic education further afield than the boundaries of the school.