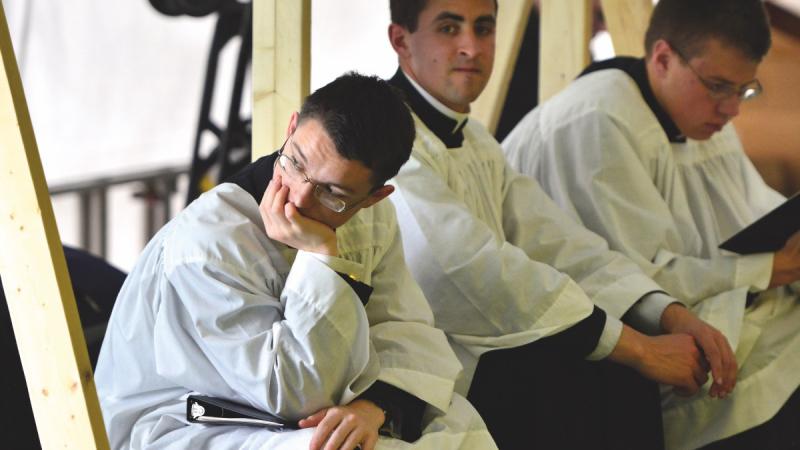 You might be puzzled by the title of this letter. "Ad sum" is the answer you would give in Latin should your name be read out in a roll call. During the priestly ordination ceremony, the Assistant Priest reads out the names of the candidates for ordination, to which the ordinandi reply "Ad sum!" or "Present!"

Technically, this would be the very moment of your vocation, should you choose to give yourself to the priesthood; it is the moment when you are called in the name of the bishop to receive the sacrament of Holy Order. It is the culmination of a journey often strewn with obstacles and doubt, demands and sacrifice; a journey that the world does not understand.

The "Ad sum!" that you might cry out before the bishop, the ministers, and the faithful would be but the exterior and climactic manifestation of the interior "ad sum" oft repeated since the desire to enter seminary was first discerned. Standing before the bishop, candle in right hand, chasuble folded over your left arm, you would have prepared yourself for this moment by leaving the world, leaving its way of life, and leaving its outward dress in order to become an adopted child of the Church by the ceremony of tonsure, to approach the altar by the four minor orders, to reach the threshold of the priesthood by the major orders of the subdeaconate and deaconate, so that after much prayer, study, and the exercise of virtue, you might be ready to receive the greatest gift that God can bestow on a man: the sacramental priesthood which is nothing less than a participation in the priesthood of Our Lord Jesus Christ.

Order in the hierarchy

The sacrament is called Holy Order because it inserts the recipient into an order which is the hierarchy of sacred ministers (subdeacon, deacon, priest, bishop). Ordination to the diaconate and to the episcopate are also part of the sacrament of Holy Order. All three ordinations – to the diaconate, to the priesthood and to the episcopate – imprint a character on the soul which mark the ordinand according to his order.

To be ordained is to be ordered (configured) to Christ as the mediator between God and man. We say that the priest participates in the priesthood of Jesus Christ who is the sole priest of the New Testament. The priest, therefore, in the person of Christ, offers the Divine Sacrifice to God on behalf of man, and draws down heavenly gifts of grace to order men and the whole of society to God.

The priest is not just a conduit of gifts from man to God and from God to man; he gives himself to God along with Christ as the victim. He also gives himself to man along with Christ as a teacher, governor, and sanctifier. In relation to man. his purpose is to bring mankind back to God, both as individuals and collectively in society. For this reason, too, we could say that the sacrament of Holy Order is aptly named because its purpose is to put order in the world – into individuals, families, communities, nations, the whole of society – so that they may finish in God. (

This order is not just an order of actions (moral behaviour), but also an order of being. A man ordered to God in his being is one incorporated into the Mystical Body of Christ by sanctifying grace. In summary, the priest is one who works for the recapitulation of all things in Christ (cf. Pope St. Pius X's motto taken from St. Paul: Instaurare omnia in Christo).

The need for Holy Order

In the world today, instead of moving towards a recapitulation in Christ, mankind appears to be collectively distancing itself from God with fiendish determination. The Culture of Death, of which "woke" culture is the latest sub-species, is in despotic ascendancy everywhere in the world – even in the Catholic Church. The greatest powers of the world are united in creating a "new world order" which in fact is just a continuation of the old-world disorder of Lucifer's rebellion against God; and the only way this movement can be reversed is by the sacrament of Holy Order.

We need more young men to say "Ad sum!" The eternal future of so many souls and the history of the world depend on it. Just think, a priest ordained at say 26 and living until eighty would offer over 20,000 Masses in his life, would hear perhaps 30,000 confessions, would give Holy Communion close to half a million times, would baptise perhaps 500 souls, marry perhaps a 100 couples, catechise hundreds of children and adults, and bury another 500 souls. Every vocation, therefore, is a world changing event.

"Ad sum!" – first in your heart and, later, before the bishop on the day of your ordination – is your choice. Don't wait for a damascene thunderbolt, or a gentle whisper in the breeze; a vocation is your choice.

If there are no insurmountable obstacles on your path to the priesthood (such as responsibilities, or dependents, or notoriety) and if you have the requisite moral and intellectual virtue, all that is holding you back from uttering "Ad sum!" is your will, because it's your choice.

So dear ________, ponder this call to cry "Ad sum!" to the bishop. If it fills you with fear, know that you can't be courageous unless you are afraid, and I know how much you treasure the virtue of fortitude.